This is intended as a friendly, analysis of a public digital product (The Robidog Dog Toilet Finder). The intention of such an analysis is to figure out what we can learn from the execution, what can be improved and what we would do differently?

In Switzerland, in and around most urban areas the local municipality makes sure there is an adequate amount of waste bins equipped with plastic bag dispensers. These plastic dispensers are used by dog owners to make it easy for them to pick their dog's poop.

After picking up the poop, dog owners can use the bag as a cover for their hand while they pick up the poop. After picking it up, while still holding the poop, they can turn the bag inside out, leaving the poop in the bag while keeping the hand clean. The poop-filled bag can then be deposited in the bin.

Initially I thought the bins equipped with these plastic bags were special bins for dog poop only. It turns out this is not the case. These bins can be used as regular bins as well.

What is Robidog Finder App?

While walking our dog around the block, I've become accustomed to seeing the orange plastic bags dispensed at the nearby bin. I saw that they were being issued by a company called Robidog and they included some nice instructions on how to pick up and dispense with the dog poop. In addition to the intructions there was also a QR code on the bag, which seemed to be indicating there was an accompanying app. So I decided to check it out. 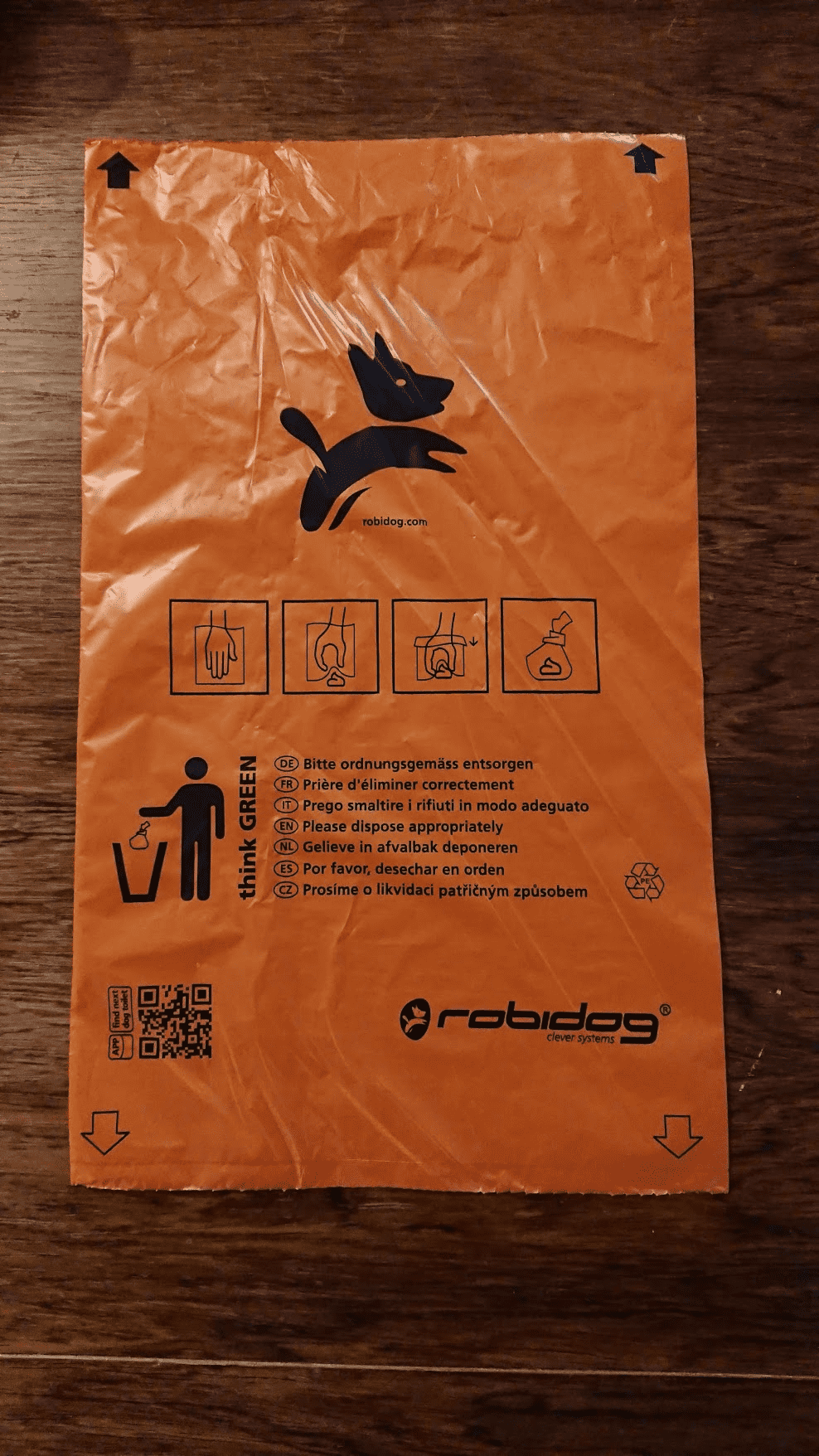 Sure enough, the QR code, when read with any QR reading app, provides the user with a URL they can open in their mobile browsers. This brings them to a landing page for the Robidog Finder app. On this page there are links and QR codes for iOS, Android and Windows Phone versions. 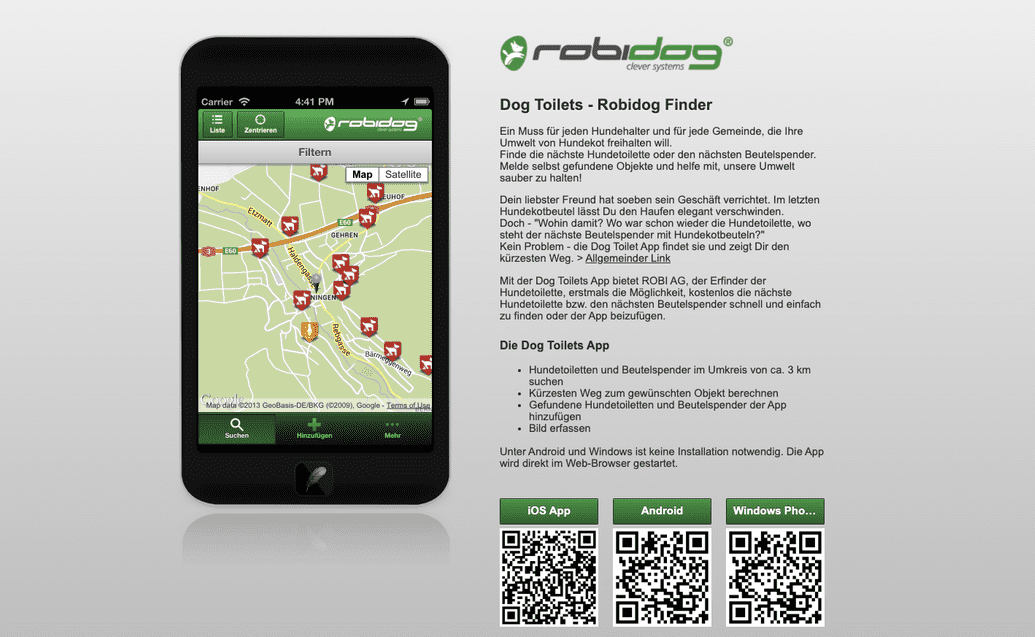 The iOS link points to the App Store where a native version of the app can be downloaded. The Android and Windows versions link to a responsive web app, which is only accessible from mobile devices.

I've turned the web app into a clickable prototype so you can easily click through it yourself to get a feeling for the app's functionality. You can find it here.

Before we continue with our Product Teardown, I always think there's value in coming up with a Product Definition Statement to help create clarity around what the product is (and what it's not).

Robidog finder is a native iOS app & web-app (only accessible on mobile devices) which allows dog owners to find the nearest doggy bin based on their location. The app contains a database of dog toilets which are crowdsourced from the app users themselves. This is made possible by the app's second feature which allows dog owners to submit a new doggy bin location by submitting the user's location as well as a picture of the dog toilet.

How to think about digital products

When it comes to digital products we here at Pocket Revolutions encourage people to think of successful products as products that are:

If you think in those terms, you can understand a product quite quickly.

What are the user goals?

Disclaimer: We can only make educated guesses about the user's true goals here as we have not spoken to the end-users themselves. What follows is an educated guess.

There might be different scenarios in which a dog owner is interested in locating the nearest dog toilet. The bin's plastic bags tend to get restocked every week. Certain doggy bins are used more often and as such they tend to run out of plastic bags earlier. Sometimes there will be no bags left for multiple days before they get restocked.

Dog owners usually carry some spare bags, but sometimes they may find themselves in a situation where their dog has just relieved themselves, there is no dog toilet nearby and they have run out of spare bags themselves. In these cases a dog owner may ask themselves, what's the nearest doggy bin besides this one? But with one additional criterion: What is the nearest doggy bin besides this one, which still has a stock of plastic bags?

If this is indeed the user's goal, then the Robidog Finder app offers a partial solution. It does help the user locate an alternative nearby dog toilet, however:

It provides no information on whether or not this toilet will still have plastic bags.

I live in Muttenz and we have a dog. But after a week or two of living here, I know pretty much where the dog toilets are. There have been moments that I've wondered where is the nearest dog toilet. But these moments have been few and far between.

One option for the dog owner faced with no plastic bags at his disposal is to do nothing. Leaving the dog poop is considered very rude and in Switzerland, but I've seen enough abandoned dog poops to know that this a possibility.

Another option could be notifying Robidog, or the local authorities, which specific doggy bin has run out of plastic bags. Robidog can collect this data and make more sense of it before presenting it back to the gemeinde.

What are the business goals for Robidog AG?

Disclaimer: Without speaking with Robidog themselves, we can only make informed guesses as to what the business goals are with the Robidog Finder app and whether they're being met. That said, here are some educated guesses.

A widely and actively used Robidog app may lead to an increased brand awareness of Robidog AG as a provider of dog toilets. This might indirectly lead to more or easier sales.

A successful Robidog app may contribute to Robidog's image of being an innovative company that knows what it's doing.

They made several design choices that are worth noting.

What are they doing well?

The app is getting used

It's apparent from the user-submitted dog toilets that the app is indeed getting used. There also seems to be a regular influx of review on the App Store which would also indicate usage.

What can they improve?

If you allow for users to add something you need to allow for them to delete it as well.

Norman and Nielsen from the NN Group define 10 usability heuristics as guidelines for interaction design. The third heuristic on the list, "User control and freedom", highlights the need to always allow users to undo (and redo) the actions that they take.

In the case of the Robidog Finder app there is an option to contribute a new dog toilet at a certain location, but there is no option to remove it if you've made a mistake. This missing ability shows up in grievances in user reviews on the Apple App Store.

Any app initiative should be viewed from the perspective that the app will require ongoing maintenance. Mobile operating systems update regularly and consumers buy new phones on a nearly yearly basis. An app that works now might experience a loss of functionality in the future.

No app might be better than an app with bad reviews

What could they do differently?

Here are some related problems that I know I have.

I don't know where the nearest place is to walk the dog.

Sometimes there are no bags left at one station. At certain stations on a Sunday there are almost always no bags left. This information could be relayed to the local Gemeinde.

A source of real frustration is the reality that certain bins will run out of plastic bags several days before they get restocked. Not only is it frustrating to find oneself without a plastic bag, it's also annoying to have to devote headspace to the question whether or not there will be plastic bags available on the daily walk.

What are some ways Robidog could address this problem? Here are some off the cuff ideas.

A QR code on the dog bins. This allows users to report when the bin runs out of plastic bags. Robidog can relay this information to the local authorities, so the plastic bags can be restocked more quickly. Or, equip the most popular bins with larger or more plastic bag dispensers to deal with the higher usage.

After a user has reported that the bin is empty, users that have subscribed to the bin may receive a notification that it is empty. They can see on a map the dispensers that have been flagged as empty. The empty status gets reset after every week.

This improved user experience may help Robidog in winning contracts with local municipalities who are considering offering the dog toilets themselves (as the city of Zurich has started doing).

It was reported in Blick that the Robidog bins were replaced in Bern and Zurich. The main reason being that they were being repeatedly vandalized and the replacements were costly. Not only that but the dog feces were not being disposed of separate to the normal trash. The solutions Zurich and Bern opted for was outfitting the normal bins with doggy bags.

Here we do see something that appears to be a more serious problem. The bins are being repeatedly vandalized. How can this be handled? I can imagine this being somewhat ameliorated by the material choice of the bin. 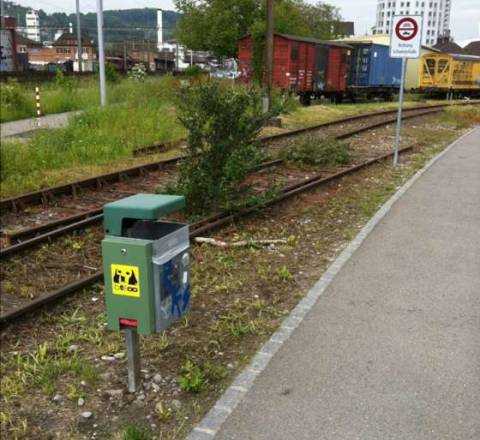 As such it looks to me like Robi AG have done a sensible thing. They've created an app with an affordable tech stack. They cover the main mobile platforms. They don't cover desktop, but this also doesn't seem like a huge issue but the use case for using desktop seems even more unlikely.